I was charged with designing a mark that 1.) followed our template for internal logos, 2.) stayed true to the Nationwide brand strategy, and 3.) was unique. The Nationwide blue square resembles the Nationwide frame mark. The segmented grey square represents technology and the negative space created by their union represents how Nationwide and technology come together under this group. 2007

The Nationwide Test Symposium was a one-day conference mainly dealing with software testing. They chose this mark because it conveyed magnification, attention to detail, and variety. 2007 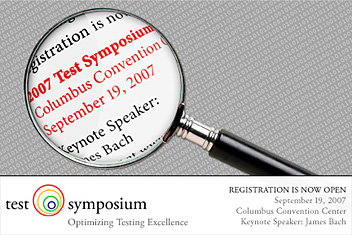